You are here: Home / Archives for New Decal Release Republic Airlines was purchased by Northwest Orient Airlines in 1986. Following the purchase, much of the Republic fleet was partially repainted into “interesting” hybrid paint schemes with the new merged airline’s “Northwest” titles. Our decal depicts the hybrid Northwest / Republic DC-9-14/-15 fleet in this unique scheme. END_OF_DOCUMENT_TOKEN_TO_BE_REPLACED 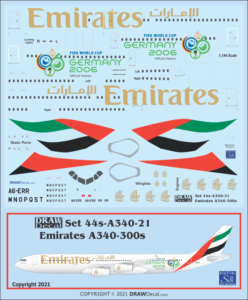 Emirates operated a small fleet of eight ex-Singapore Airlines A340-300s. The last four left the fleet in 2016. Our decal depicts the standard Emirates scheme used on these Airbus A340-300s.  We have also included the FIFA World Cup Germany 2006 titles that were seen on at least one of these Emirates A340s. END_OF_DOCUMENT_TOKEN_TO_BE_REPLACED 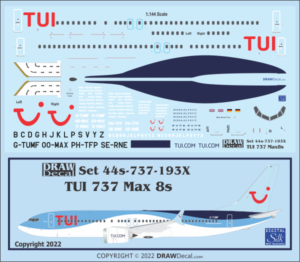 TUI Airways and it various subsidiaries are a large operator of both the 737-800 and 737 Max 8 . Both fleets are identically painted in TUI’s now standard “Dreamliner” scheme first introduced on their 737-800s. Our Max 8 decal includes registrations and corresponding ship names for 34 different aircraft, and the 737-800 set includes registrations for the entire TUI UK fleet.  We have also updated our prior sets for the Thompson 737-800s to include the dark blue fuselage stripe section. END_OF_DOCUMENT_TOKEN_TO_BE_REPLACED 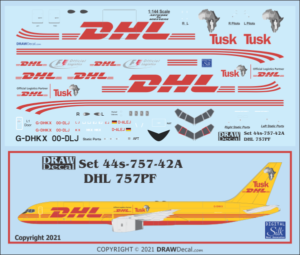 We have updated our long-serving DHL 757 decal to fit the new Zvezda kit.  We also took the opportunity to break the artwork into two completely new sets, one for the sole 757PF operated by DHL and the other for the new DHL Austria “Hello Austria.”  Both decals are complete with our fine 757 detailing decals. END_OF_DOCUMENT_TOKEN_TO_BE_REPLACED 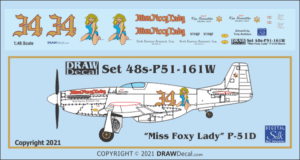 In 1975 Ken Burnstine raced his modified P-51 “Miss Foxy Lady”, N70QF, in this all-white scheme.  This release follows our prior release of “Miss Foxy Lady” from 1974 in a black scheme. END_OF_DOCUMENT_TOKEN_TO_BE_REPLACED 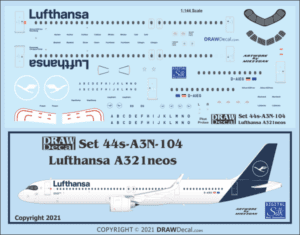 In May 2019, Lufthansa German Airlines took delivery of its first Airbus A321neo aircraft. Eleven aircraft have been delivered so far, with at least thirty more on order. These aircraft have all been delivered in Lufthansa’s current color scheme. This decal provides the markings and ship names for any aircraft in the current fleet. END_OF_DOCUMENT_TOKEN_TO_BE_REPLACED