In December 2006, TNT Airways took delivery of the first of four Boeing 747-4HAF(ER) freighters.  The aircraft are powered by GE CF6 engines.  The first two aircraft were painted in full TNT colors, and the second two were delivered on Emirates Cargo colors.  This set just covers the first two in the full TNT colors. 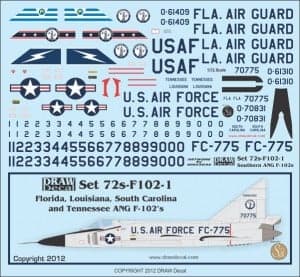 This decal provides the markings for four southern USAF Air National Guard F-102 units – Florida, Louisiana, South Carolina and Tennessee.  The markings are very similar among the various units – overall ADC Gray (FS16473).  This set will letter one of model in any of these four units markings in 1:72 scale for the Hasegawa F-102 kit. U.S. express carrier FedEx has operated a large fleet of Airbus A300-600 freighters (over 70 different aircraft at one time or another).   As with the venerable Boeing 727, FedEx took delivery of the final A300 built – N692FE. 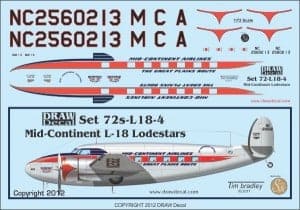 Mid-Continent Airlines were actually the launch customer for the Lockheed Lodestar, putting three of the Model 18-07’s into service on “The Great Plains Route” flying from Tulsa,OK to Minot, ND with stops in between.  This set is designed for the Special Hobby Lodestar kit in 1:72 scale.

As with other Star Alliance member airlines, Egyptair has painted several aircraft in the Star Alliance colors scheme.  This decal provides the markings for Boeing 737-866 SU-GCS, which was delivered new from Boeing in these colors in the Fall of 2008. Air Transat of Canada introduced a new color scheme in 2004 which was used until 2011.  This decal provides the markings for the airline’s GE-powered Airbus A310s in these markings, including the special Christmas artwork.  This set is available in 1:144 scale for the Revell A310 kit.