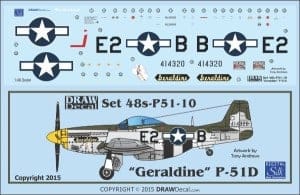 “Geraldine” represents the mount of Charles Roscoe “Chuck” Cummins of the 361st Fighter Group, 375th Fighter Squadron. “Geraldine”, N5500S has been restored to a very authentic standard, and this decal represents this Mustang as it appeared at Gathering of Mustangs and Legends in Columbus, Ohio during 2007.  This is a first in the series of ALL 77 P-51s that were in attendance at this monumental event in 2007.  Yes, Tony Andrews will be recreating all 77 Mustangs as they appeared at this event.  This first release as well as all subsequent releases in this series will be available in 1:24, 1:32, 1:48, 1:72 and 1:144 scales and printed in our state of the art Next Generation DIGITAL Silk process.  Click on either image to be linked into our store site. 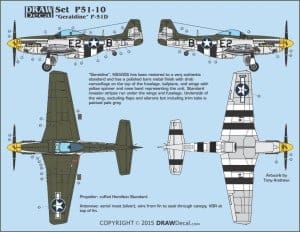 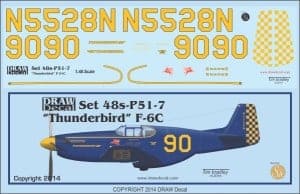 After his narrow defeat in the 1947 Bendix at the hands of Paul Mantz in a P-51C Joe DeBona knew that he would have to acquire a similar Mustang if he was to beat the veteran Hollywood stunt pilot and Bendix Trophy competitor.  For the 1948 Bendix DeBona was able to acquire such an aircraft, in this case it was an F-6C which was the photo-recon version of the P-51C.  DeBona ran out of fuel in the 1948 race, but his fortunes turned and won the 1949 Bendix race. 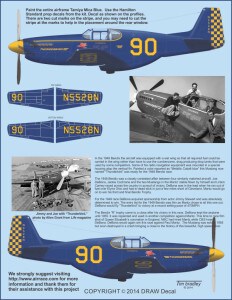 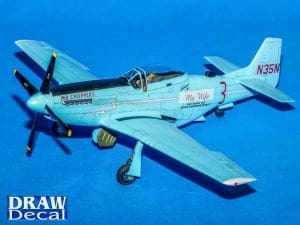 Ross Armstrong did a masterful job with the 1:48 Tamiya P-51D kit built up as the 1964 Reno unlimited racer MR CHOPPERS.  The kit was built virtually straight out of the box with the addition of a few antennas and a scratch-built two-place cockpit.  The paint is a mix of  Gunze Mr Color paints with C34 cyan as the base with some white and gray added.  Click on either image to be linked into our store site to see more photos of his completed build. 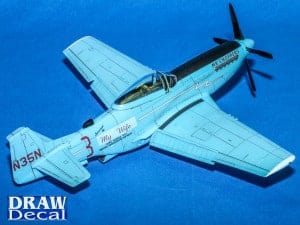 23-year old Chuck Lyford flew this all-white P-51D-25 in the 1964 Harold’s Club Transcontinental Trophy Dash from St. Petersburg / Clearwater, Florida to Reno Nevada.  After leading the entire race, a serious of events at the end of the race conspired to have Chuck finish 2nd out of the eight P-51s that started the race.  Chuck’s P-51 was unique as he added 150 gallon Skyraider drop tanks to extend his range.  Chuck later raced the “Bardahl Special” at Reno, without the drop tanks of course.

END_OF_DOCUMENT_TOKEN_TO_BE_REPLACED 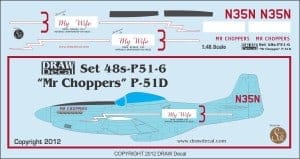 Raced at Reno in 1964 and possibly later years, “Mr Choppers” was owned by C.E. Crosby of Bellingham, WA.   44-74602 is now owned by Jack Hovey of Ione, CA and is now painted in a  desert sand / spinach camo scheme.  This set is for the stock appearing aqua-blue P-51 from times past. 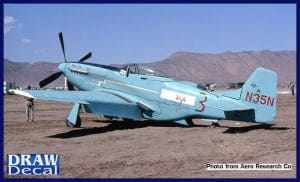