In March 2022, Lufthansa Cargo added its first narrowbody freighter in many years. The A321, D-AEUC, is operated by CityLine and will be joined later by a second airframe (D-AEUA). This decal provides the markings for this P2F converted freighter. END_OF_DOCUMENT_TOKEN_TO_BE_REPLACED

Starting in 1998, Lufthansa Cargo operated a fleet of 19 MD-11Fs. The big Trijets were drawn down as the newer 777Fs were added to the fleet. The final MD-11F operated by Lufthansa Cargo, D-ALCC had “Thank you MD11 Farewell” titles added for its final flights in October 2021. END_OF_DOCUMENT_TOKEN_TO_BE_REPLACED

In February 2018, Lufthansa unveiled an update to its long-serving paint scheme. Gone is the yellow in the tail crane logo, and the resulting look is that of yet another white whale livery. This decal provides the markings for Lufthansa Cargo’s 777F in these new colors. Our latest Next Generation DIGITAL Silk release is available in both 1:144 and 1:200 scales, and it includes double-struck white ink.

END_OF_DOCUMENT_TOKEN_TO_BE_REPLACED 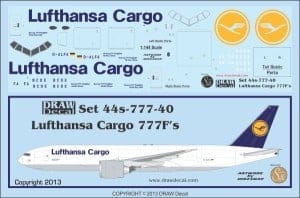 In the Spring of 2011, Lufthansa Cargo ordered five Boeing 777 Freighters.  The aircraft would allow the airline to begin to modernize its fleet, replacing the faithful McDonnell-Douglas MD-11.  The first 777 was delivered in the Fall of 2013 and named “Good Day, USA.”  We waited to release this one until the ship name was unveiled earlier this week.  This set also includes the next two announced ship names “Jambo, Kenya” and Ni Hao, China.” 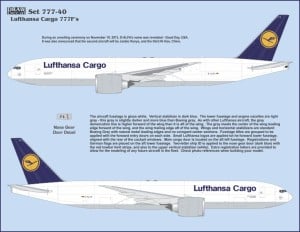 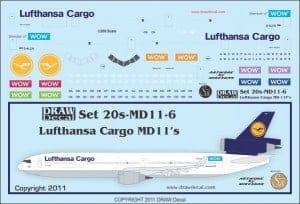 Lufthansa Cargo operates a large fleet of MD-11 freighters, including D-ALCN, the last MD-11 built.  The “Mega” Dogs began arriving in 1998, and replaced the older Boeing 747-200Fs that preceded them.