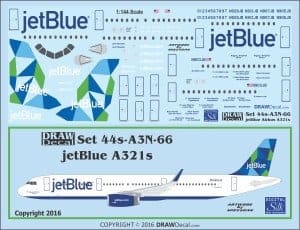 This week Airbus delivered its very first US-built Airbus jet to jetBlue, A321 N965JT “BluesMobile”  at its plant in Mobile, Alabama.  Our jetBlue A321 decal has been updated to include the ship name “BluesMobile” as well as 10 other A321 ship names in the jetBlue A321 fleet.  Our Next Generation DIGITAL Silk decal is available in 1:144 scale for either the Zvezda or Revell kit as well as in 1:200 scale for the Hasegawa kit.  Click on either image to be linked into our secure store site.

In September 2014, US Ultra Low-Cost carrier Spirit Airlines unveiled a new color scheme and corporate branding strategy.  By its own proud declaration, the scheme is simple (the company preferring not to waste money on fancy paint), featuring a bright yellow aircraft with black markings.  The first aircraft painted was Airbus A319 N534NK.  In July 2015, the first of many new-build Sharklet-equipped A321s was delivered in the new colors.  This decal provides the markings for A321s in these new colors and joins our other sets we offer for the A319 and A320s in this scheme. 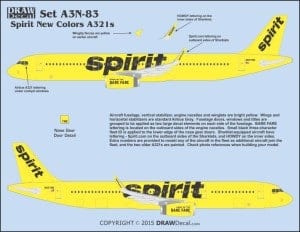 This Next Generation DIGITAL Silk decal is available in both 1:144 and 1:200 scales.  Click on either image to be linked into our store site.

Founded in 1980, Aero Lloyd was a German charter airline.  Initially operating with Caravelles, and then later MD-80s, the company switched to Airbus A320 and A321 aircraft in the late 1990s.  The company went bankrupt in October 2003 and ceased all operations.  Some aircraft continued flying in the U.S. through the Spring of 2004 on winter lease with Ryan International Airlines for Funjet Vacations and Trans Global Vacations.  This decal provides the markings for the standard Aero Lloyd scheme, as well as the vacation charter titles.

In the late Fall of 2013, jetBlue Airways began taking delivery of its first Airbus A321s.  The initial order for 30 aircraft was actually a conversion of previously ordered A320’s to A321’s.  To celebrate the new fleet type, jetBlue has introduced a new tail design for the A321 fleet.

This set is available in 1:144 scale for the Revell kit and in 1:200 scale for the Hasegawa kit.  Click on either image to be linked into our store site.

In November 2013, Germania of Germany took delivery of its first Airbus A321.  The aircraft, D-ASTD, is painted in the colors of tour operator Alltours, and will be used for holiday/vacation flying. 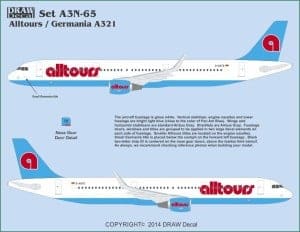 This set is available in 1:144 and 1:200 scales.  To go along with your A321 kit you will need to either scratch-build the sharklets or use the ones available from Contrails.

What better way to celebrate Oktoberfest than to revive the Bavarian low-cost operation from Lufhansa?  This comical set had previously been in our line, and now has been updated and re-released.  The original idea for HANS was a suggestion from a German friend.

HANS, part of Lufthansa, is Lufthansa’s low-cost unit based in the heart of Bavaria.  HANS operates a fleet of 6 Airbus A321-100’s, each named for a city in Bavaria.  HANS was launched in 2004 with a tremendous advertising campaign simultaneous with Star Alliance partner United’s launch of Ted, part of United.  Ted only lasted until 2008, but HANS continues to operate to this day.